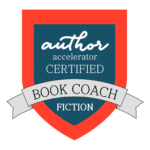 Signup for Sharon's newsletter to stay connected to the world of storytelling.

You have successfully joined the Book Coaching by Sharon subscriber list. Whether it’s an earthquake, a car chase, or just a good old fashioned disagreement, conflict is story fuel. Conflict and tension keep the reader glued to the page to see what will happen next. Stories about a walk in the park on a nice day aren’t very exciting. We like to see characters overcome barriers to reach their goals. Those barriers/conflicts can come in a great variety of forms. From villainous antagonists to stalled traffic to your best friend moving away, conflict forces characters to act/react.

Conflict shows what kind of stuff your characters are made of. The nature of who they truly are below the surface. No matter the issue, when push comes to shove, we need to give our characters something to respond/react to. Hot coffee spilled in someone’s lap can make them reveal their true colors. Does your character jump up to help clean the mess? Or do they gnash their teeth and yell and scream as if the spill was intentional? Whatever their response, it shows the reader about who the character is deep down. It’s not always as much about the specific issue as it is about their behaviors and their reactions to the conflict. It’s fascinating the deep levels of character you can reach through a little exercise in conflict.

FINDING WAYS TO PUSH THEIR BUTTONS

What traits does your character possess? Are they neat and orderly, organized and timely? Pit them against a slovenly roommate (The Odd Couple). Are they secretly working for the resistance but hiding it from one another? (The Nightingale by Kristin Hannah). Are they completely introverted? Force them to face the crowd. Does your character have a fear of reptiles or heights? Make them face their fears to reach their goal (Indiana Jones or Humpty Dumpty in After the Fall by Dan Santat).

The big ideas, our beliefs and the way we view the world, are excellent fodder for creating conflict. Deeply seated beliefs about things like, Love, Loyalty, Loneliness, Greed, Vengeance, Forgiveness, Hate, Exploitation, Justice, Redemption, etc., are keys to unlocking greater conflict between characters. Take two characters who both believe in justice and fairness, but have completely opposing ideas on how best to accomplish it and pit them against one another. (Think Captain America and Iron Man in Civil War.)

When my writing stalls, when a scene just isn’t working, when I find myself needing to spice up the story, I often find that what is lacking is conflict. Try sticking two characters in a room and tossing in some conflict. Did one of them renege on a deal? Maybe they discovered they’re both dating the same person. Are they both secretly working as spies for opposite sides? Or maybe it’s something as simple as disagreeing on where to set the thermostat. No matter the level of conflict you choose, creating chaos is a great way to spice up a story and rev up your writing. Remember, conflict is story fuel. 🙂

To explore what a Book Coach can do for you, check out my Book Coaching FAQ page.

To get craft and writing tips sent directly to your inbox, sign up for my monthly bulletin.